Psilocybin 101 – What is Psilocybin?

Next
Psilocybin 101 – What is Psilocybin?

You’re at a dinner party. Someone down the table yells down at you (the known mushroom guy), “What is ‘psycho-helen’ or ‘psycho-bend’ anyway?”

Maybe you are not a dinner party person, but we’re willing to bet that someone is going to ask you what Psilocybin is at some point. So we gathered up a definition, a brief history of magic mushrooms and related context to get a good understanding of the active ingredient in magic mushrooms. Read on! 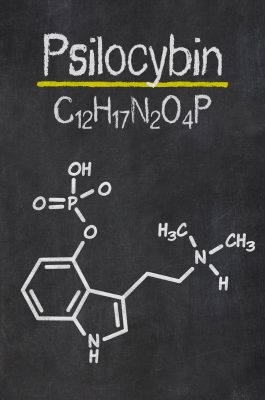 Psilocybin (pronounced “sai·luh·sai·bn”) is a natural psychedelic compound that is produced by hundreds of species of fungus. There is a difference between Psilocybin and Psilocin, which we will discuss in a future post, but for now, just know that both were first isolated and named by the famous Swiss chemist, Albert Hofmann, the discoverer of LSD.

On that note, LSD does NOT contain any psilocybin.

In laymen’s terms, psilocybin is naturally occurring in some mushrooms and the effects from it cause things like euphoria, hallucinations, and more. It is the reason why “magic” mushrooms are “magic.”

There’s reason to believe that psilocybin mushrooms have been used by humans for at least the last 2000 years. Recently, however, an article in Vice titled, Psychedelics Weren’t As Common in Ancient Cultures As We Think attempts to debunk this. However, there are multiple sculptures found in Mesoamerica from about 500 B.C.-900 A.D. in present day Guatemala, Mexico, Honduras and El Salvador that depict mushrooms. At the National Museum of Anthropology in Mexico City, there is a statue of Xochipilli, Aztec god of flowers, which has teonanacatl (hallucinogenic) mushrooms on his knees and earlobes. 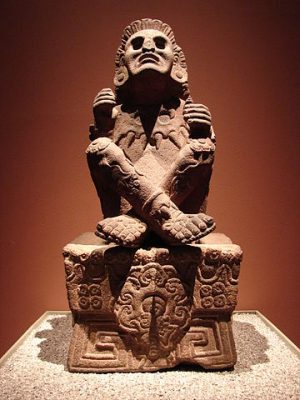 Statue of Aztec God Xochipilli from hundreds of years ago, which contains references to Psilocybin mushrooms

The first European exposure to the New World’s “Flesh of the Gods,” as teonanacatl mushrooms are referred to, come from early Spanish priests. According to the US Forest Service website, Francisco Hernandez de Toledo, physician to the King of Spain, wrote a guide for missionaries in 1656 in which he describes natives eating mushrooms which caused a “kind of ‘madness’ bringing ‘before the eyes all kinds of things, such as wars and the likeness of demons.'”

There are cave paintings in Europe and rock art in Australia (Bradshaw) that indicate mushrooms were used in those regions, also, but it is less studied.

Where do Psilocybin Mushrooms stand in our culture today?

After decades of ostracization, psilocybin mushrooms are increasingly being studied and measured for their worth in mental health.

Numerous studies are being published on utilizing psilocybin mushrooms as a way to treat depression, anxiety and other mental illnesses.  John Hopkins recently opened a facility for studying psychedelics.

In terms of legality, psilocybin mushrooms are increasingly becoming decriminalized in cities throughout the United States as we discuss in our recent post, Is It Illegal To Buy Mushroom Spores?

Also of note, especially to us, mushroom grow kits and psilocybe cubensis spores are LEGAL to purchase and possess in most U.S. states for microscopy research.

If you want the quick notes on what to say when someone asks you what psilocybin mushrooms are, here are the cliff notes:

2) Humans have probably used psilocybin mushrooms for thousands of years, most notably used by the Aztecs, Mayans, and other ancient Mesoamerican cultures.

3) Possession and selling of Psilocybin Mushrooms is illegal, though becoming increasingly decriminalized. The sale of grow kits and spores is LEGAL in most U.S. States. So make sure to check out our mushroom spores in the shop!